The Magic compass in Maritime

The principle of Magnetic compass has not been changed for a long time and it’s still being followed. It essentially consists of a magnetized needle pivoted over a horizontal plane.

Magnetic compass is one of the major maritime navigational equipment and its usage is critical. Simply put, a magnetised needle, suspended freely, points North because of the forces caused by the Earth’s magnetic field. Once North is known, the other directions are easily found. A correctly adjusted compass of a ship is always sailor’s best companion. The main advantage of a magnetic needle is that it doesn’t need any external power. As long as earth’s magnetism exists, a properly adjusted compass will show you correct directions. It works well in most of the navigable waters of the world, except areas closer to magnetic poles. Readings from compass can be easily corrected, variation & deviation is readily available onboard at all times.

The present day Magnetic compass has been developed from understanding the laws of magnetism which govern the behavior of the compass, greater precision in the construction of compass and better means to control damping of the compass needle.

Ships are made of steel. Steel is a ferromagnetic material. They are magnetized during the construction of a ship.  Magnetic properties induced on steel can be permanent or temporary, and mostly they are permanent due to energy imparted during cutting and welding. Magnetism can also be induced by earth’s magnetic lines of forces and also when placed near a permanent magnet.

A ship, therefore, is a combination of all 3 types of magnetism. The ship’s apparent permanent magnetic condition is subjected to change due to vibrations, welding and shocks. The ships induced magnetism will vary with Earth’s magnetic field strength and with the alignment of the ship in that field.

Magnetic compass should be ideally placed in a place far away from magnetic material or material that shows magnetic properties. This is to make sure that only the earth’s magnetic field affects the compass. This has been a major concern in modern ship manufacturing companies as ships these days are mainly built using steel. Steel has Permanent, Sub permanent & Induced magnetism which can disturb the earth’s magnetic lines of forces, thus causing an error in the compass. These errors are not fixed, thus if not adjusted/corrected, the compass headings and bearings cannot be relied upon. 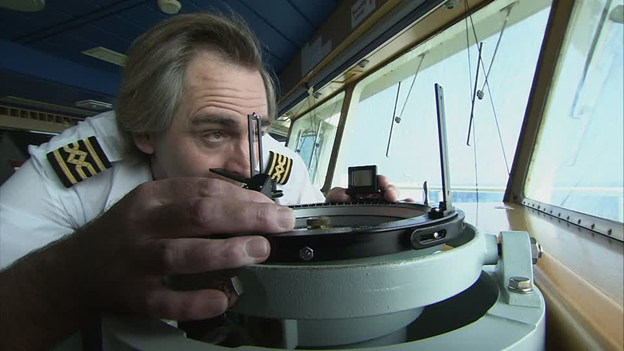 Magnetic compass is used to steer the ship on a fixed course. The compass readings needs to be accurate when at sea, because an error of one or two degrees in long sea passages can make a difference of nautical miles in reaching the destination and might consume more time than expected. The compass is also used for taking bearing of terrestrial and celestial objects for navigation. Therefore, errors needs to be nil or minimum when it comes to Magnetic compass.The compass reading at sea must be precise and accurate as much as possible.

Errors and corrections in Magnetic compass.

The angle between the true and magnetic meridian is called Variation. If the magnetic needle is drawn to the right of the True Meridian is termed as Easterly and if it’s to the left of the true Meridian, its termed Westerly.Variation differs from place to place but does not change with the direction of the ship’s head (course of the ship)

A ship made of steel contain magnetic properties. It therefore has an inherent effect on magnetic compass. Compass needle on board does not lie on the magnetic meridian but is deflected on one side or the other because of the ship’s magnetism. Although corrective magnets are inserted in the housing (also called binnacle) of the compass to counteract this, the system is not perfect because the ship also loads steel cargo which makes the error variable. This error is called ‘deviation’. Compass error is the combination of variation and deviation. These are applied to compass reader by the sailor to get the corrected compass read.

Maritronics, one of the leading dealers of maritime products and services sell some of the most accurate Magnetic compass. As discussed, compass readings are subjected to change due to various reasons. Experts at Maritronics explains each client how magnetic compass needs to be read and how they are affected by ships manufacturing.