VSAT and connectivity on ship

VSAT stands for Very small aperture terminal. It is a small telecommunication earth station that receives and transmits real time data via satellite. A VSAT transmits signals to orbital satellites which are then transmitted to different hubs around the world.

VSAT technology was an instant boon for maritime industry. The technology changed the business phase of maritime industry with modernisation. In olden times, when a ship disembark from a port, it gets disconnected with the global communication system. With the VSAT implemented on a ship, the crew and the passengers are now connected to high speed Internet services, telephone, monitoring weather patterns, filing regulatory documents and ordering supplies from sea to save time at port thereby increasing productive time and grow business intelligence.

VSATs are most commonly used to transmit:

Maritime VSAT services normally operate at Ku-band and C band for the commercial market. Ku band is the microwave range of frequencies between 12- 18GHz. While C band comes between 4- 8GHz. VSAT services are done using satellites located at GEO orbital location. Steady antennas are required for tracking since satellite location and movement of the ship are changing. A stabilized VSAT antenna has a circular dome which is 2.4 meters or less in diameter. The majority of maritime VSAT antennas range from 60cm to 1.5 metres for Ku-band and 2.4 metres for C-band.
The majority of VSAT antennas range from 75 cm to 1.2 m. Data rates, in most cases, range from 4 kbit/s up to 16 Mbit/s.A remote maritime VSAT system typically consists of two parts: Above Deck Unit and Below Deck Unit. Above Deck Unit consist of an antenna and a transceiver that is placed outdoors mostly inside a radome. Below Deck unit is the system which controls the antenna from inside. 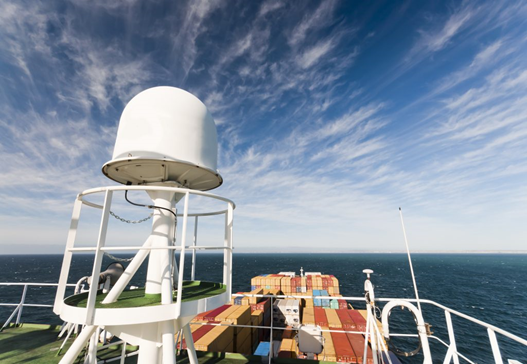 Ships share bandwidth with others which can provide adequate service onboard and fulfil basic communication needs. This is a traditional method of maritime communication. Sharing can cause loss of data and thus large data communications can’t be done when sharing between vessels are done. Operation in the offshore, exploration, cruise or ferry segment needs large data for operation. VSAT can provide guaranteed level of bandwidth for the transmission of data or voice at broadband speed.

Maritime operators around the world has started realising the value of VSAT and how they can increase the profitability and gain market. VSAT data rates are increasing with passing years allowing to stream videos and bandwidth-intensive business applications.Today, we’ve arrived at a point where VSAT technology is growing in value and is undergoing significant innovation to make it easier and more affordable to deploy.
High Throughput Satellite operators are set to debut next-generation maritime operations. Maritime equipment companies are manufacturing compact terminals and antennas to improve hardware economics. And application developers are rolling out new offerings that enable maritime operators to leverage VSAT to run safer, more intelligent and productive operations.

Maritronics has a fleet of the most updated hardware systems for maritime services. They have been providing various VSAT systems for different vessels across the globe. You can contact Maritronics to know more about VSAT and how these can be implemented in your service or carriage ships.